All Saints and All Souls Days (B)

I recently had a conversation with a new friend about how many facial features and physical characteristics are shared by people of Mediterranean and Middle Eastern descent. My friend, who is a first generation American of Palestinian heritage, told me that he is often presumed to be Italian. I’m half-Italian but look more like an everything bagel, or better yet, a pizza with all the toppings. Hard to tell.

The conversation with my Palestinian-American friend led me to mention my interest in National Geographic Magazine’s “Genographic Project”, which has the fascinating end goal of identifying the geographic origins of human life. I really want to participate in this study. In exchange for a smear of saliva and $199 to cover the cost of the kit, (so worth it!) I can, according to the website, identify the migration paths that my ancestors followed “hundreds—even thousands—of years ago” and determine more accurately if I actually am the chopped salad of Italian/Danish/German/French/English/Russian heritage that my previous genealogical research (see below) revealed. My new, wise friend said, “In the end, we are the same.” Yes. Yes, we are.

This Sunday, November 1, we honor in a special way every known and unknown Saint, and on Monday, November 2, we honor our deceased family members and friends. All Saints and All Souls. As baptized Christians we are called to be the former; as human beings we can’t avoid becoming the latter. In the end, we are the same. Last year for All Soul’s day I wrote about the discovery I made doing my family history. I have chosen to re-post it because it speaks to that human interconnection which my friend named.

Early in my marriage, when my husband was in law school, I decided to trace my family history. Stories about stout-hearted immigrant ancestors who scraped together the fare for passage, and willingly left their families and everything they knew for what they hoped was a better life used to break my heart. But those stories also inspired me. These were sturdy and brave souls; braced for whatever awaited them on the distant shore. I felt compelled to know them better because I shared some of those traits. 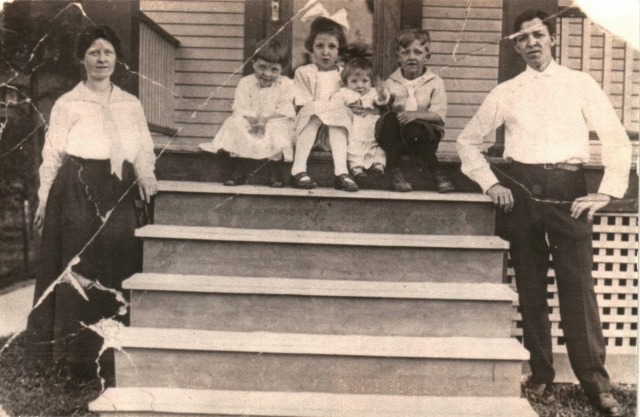 My great grandparents and their children. My grandfather is seated on the right.

At that time there were no online immigration records. Research involved letter writing, contacting distant relatives for copies of pictures, marriage licenses, birth certificates, and the hand written details inside the old family bible. It included working with translators who could communicate with village churches in the old country, and countless Saturdays spent in the New York Public Library combing through rolls of microfilm for census records, city directories, and vital records. It involved studying maps and taking road trips. It was a treasure hunt that led me to an amazing discovery.

My research began with my four grandparents, which turned into sixteen extended families. On and on it went. Through the process of collecting and weaving bits of data into family stories I actually developed a relationship with my ancestors. I felt I knew them somehow, and I did.

Incredibly, I was able to piece together vignettes of life through historical records: addresses and occupations, the age and number of children, whether they rented or owned, if they lived in a flat, over a store, with other relatives or took in boarders, and whether they had received their sacraments. All of these things plus what was happening locally and globally helped me “know” them.

For most, life was difficult. Many were poor. I located news clippings and obituaries for children hit by a streetcar, or runaway horse, or who succumbed to an illness that is no longer a threat. I learned about their neighbors and what part of town they lived in, and if they were active members of their church or community. 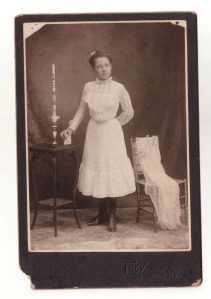 My great-aunt on her Confirmation day.

In addition to facts, my research generated questions that had no answers, like how they spent their day, if they did acts of charity, who were the silent saints among them, and who might have been affected by a simple kindness, or a friendship between neighbors that changed a life for the better.

I discovered a profound level of human connection that revealed our divine union with God. I realized what I was doing was in fact honoring the lives of those who had passed, and ultimately honoring God, of whose great plan they were a part. Were it not for this divine union we would not exist. I honor them with my prayers in a special way on All Souls Day.

The legacy we leave begins with living in right relationship; it dwells deeply in the life of every single person with whom we share a moment, a kindness, or a generous act, as well as in the things we do to ensure a future for those souls who are with us and those yet to be born.

Happy All Saints and All Souls Day.